I am not a hip hop dancer. So when I went dancing last weekend with a couple of pros and some other friends who were also awesome, instead of trying to be who I wasn’t, I enjoyed watching those who can do it really well. I would try to mimic some moves and did a couple successfully.

Because I was embracing how poorly I can dance hip hop, and because I was just focusing on having fun…I really had fun!

I think I’d like to apply this principle to other areas of my life. I look forward to having more fun.

Malachi’s class had a field trip. They’re learning about plants in school, so they went to the local outdoor plant market at the mall across the street from their school. I went as a parent supervisor.

Once we were at the market their teacher gave them instructions on their assignment and told them to explore.

I had two boys with Malachi and me and they really liked the little cactuses at the very front. So they asked the woman who sells them their questions three and wrote their answers. Malachi kind of liked the cactuses, but he really wanted a “peaceful plant.”

One thing you may not know about Malachi is how sweet he is. He’s sensitive, loving, caring, kind, and so sweet. So I wasn’t surprised when he said he wanted the “peaceful plant”, it just endeared him to me even more.

The older I get the more peace I want in my life. Maybe it’s because I have three young boys. Maybe it’s because there’s a lot of stress in living abroad and in frequent moves. Whatever the reason, I very much treasure peace (and quiet). So I understood Malachi’s desire to have a “peaceful plant.”

He picked a very pretty, very peaceful plant…that he left in his cubby at school. It’s a good thing that it’s an indoor/low water plant! 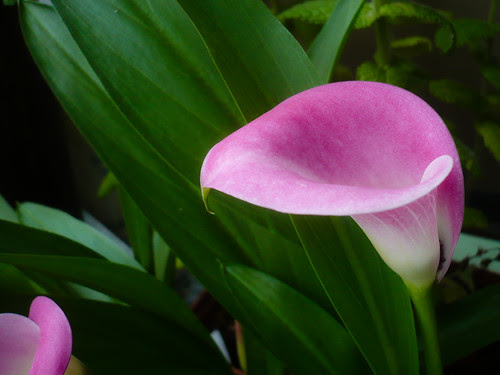 Photo courtesy of My Gardin in Japan

It’s not a calla lily but it does look like one. His is this color, but it has a bright yellow and tall stamen or pistil, I don’t know which it is.

I hope Malachi has a greener thumb than his parents.

Disclaimer: All photos were taken by John. Also, my internet is wonky right now and I can’t get the resort’s website to work. I apologize for things like: “Filipino restaurant” and “Italian Restaurant” instead of giving the names. I’ve been sitting on this post for weeks, so I didn’t want to wait any longer.

John is amazing at planning trips. He has been since before we were married (at 20 years old). When his parents were coming into town we figured that we had to get out of the city for at least a couple of nights. They had a trip planned to Bangkok and Phuket so we didn’t feel that a beach trip was necessary. We thought about doing the typical Baguio trip, but I didn’t feel like being squished in the car for that drive, plus we thought there isn’t much to keep the children occupied.

So he researched different options. We thought about driving to Batangas and ferrying over to Puerta Galera. But, that’s a beach trip.

He found a resort in the city of Bagac in the province of Bataan called Las Casas Filipinas de Acuzar. It’s a resort that’s mostly colonial Spanish mansions that have been moved from other parts of the Philippines to this resort. He reserved two rooms. One was a suite with loft so there was one room big enough for kids.

We left our house just before 9:00 a.m. on a Wednesday and made it to the NLEX in 40 minutes. The drive going out of the city wasn’t bad, it was the poor souls going into the city on the NLEX that were moving at a snails pace. “How do we avoid that?!” I exclaimed “Don’t leave the city,” was my husband’s reply. It was quite discouraging. After driving North for a while I forgot the traffic and looked forward to a short vacation.

We stopped at Jollibee for lunch. We tried going to the golden arches, but couldn’t find parking. It was my first, and last, experience at Jollibee. The food is not good. The Filipinos really like it though, it’s quite popular here. Malachi and the kids eat it, so they can continue to order delivery when we’re out. Just as long as I don’t have to eat it.

We arrived at our resort about four hours after departure, making our driving time about 3 1/2 hours. 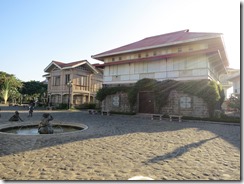 Security was high, but we went through the outer gate and parked at reception after being given permission to pass through gate 2 (only driven through for pick up/drop off). After parking in front of the registration building the guys checked us in while the girls stretched their legs. 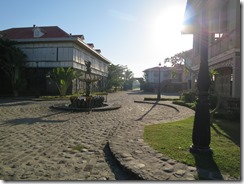 Gate 2 with the registration building on the right

Two porters brought our things to our rooms. The building we were in was Paseo de Escolta. It’s a constructed building with new and old materials, but you wouldn’t know that to walk in the building and up the stairs. You would think the whole building was five hundred years old. You walk through your room’s door and are still amazed at how authentic it looks. Except for the flat screen T.V. and A/C (and electricity, obviously) the room feels very colonial Spanish. The bathroom is definitely modern. It melds well with the theme of the room, even though it’s obviously five hundred years different (Plus it has a bath tub! I don’t have a single tub in my house, so I was so excited to have a bath.). 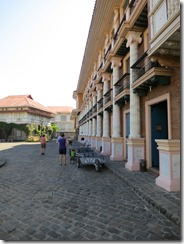 We put our stuff down and changed to our swimming suits to head over to the beach. When we got to the beach we were unpleasantly surprised by how hot the sand was. It’s dark, volcanic sand since it’s right by a volcano. With the sun blaring down on it in the hot Filipino summer, the beach it hot, hot, hot. The water was nice, though. It’s calm, the ground is rock free and smooth, and there was no wild life. If you venture from the beach to the lagoon, be careful – there are dangerous tiny spikes off something (I can’t remember what). The husb had three in his feet. I had to use tweezers to get them out. 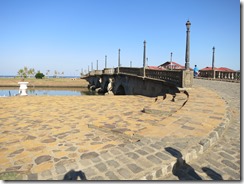 The walking bridge to the beach 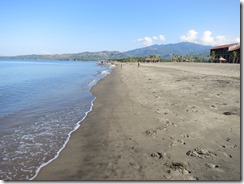 Coen and I went in the room to rest for a bit. While we did that everyone else went to the pools. The water is different, but doesn’t seem bad. Our kids loved the pools and we all went back the next day. 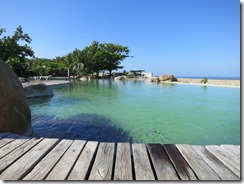 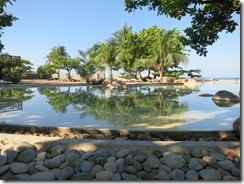 The shallow pool, perfect for kiddies

The resort had two restaurants open during our stay. We tried to go to the Italian restaurant, our first night, but we were too early. So we had dinner at the Filipino/Spanish restaurant. We all enjoyed our food, even though we had low expectations. The service wasn’t horrible, but I’ve had better…even in Manila. This restaurant is also where they served breakfast, which came with our rooms. We had the American breakfast (eggs, toast, bacon). It wasn’t great, the eggs and bacon were both undercooked, but I’ve had worse. The second morning I asked for my bacon to be cooked more and everyone’s came out darker.

The second day we went on a shorter road trip up to Zoobic Safari (I can’t find pictures). The kids loved it. We paid for the guided tour and headed out on our two and a half hour guided safari. We were in a large-ish group with our awesome tour guide. She and Simon became great friends.

At one point we got into jeepneys with the windows barred up. We drove into the tiger enclosure and one of the safari employees shoved raw chicken through the holes in the bars. The tiger was inches away from us. After that, we went to the lion enclosure and did the same thing. The lions were so pretty, especially the lioness. She was my favorite animal in the whole park.

After two and a half hours at Zoobic we were dirty, hot, and tired. But we all had a really good time.

After the road trip back, it was time for the other pool visit that I previously mentioned. After the pool, and some rest, we had dinner at the Italian restaurant. Funny tangent…the hotel called the room earlier in the day to see if I wanted a reservation in one of the restaurants for dinner. When I made the 6:00 dinner reservation at the Italian restaurant I was happy knowing that we’d have a place. For most of the dinner, we were the only ones there. Apparently I didn’t need to be worried. 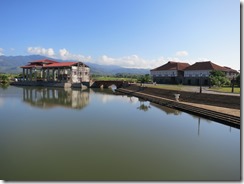 New construction on the left. Old Mansion on the right which houses the Italian Restaurant.

The food there got mixed reviews in our group. I enjoyed it, John thought it was ok. The kids all ate their fill, and to have all three kids eat successfully at one meal is awesome. It’s a win in my book.

After dinner it was bed time! The beds in the hotel are hard, and not in a bad way. I have a memory foam mattress, so I’m used to hard beds. But the pillows are hard too! Neither of us was happy with the pillows.

The next morning after breakfast, we walked around to take pictures and then headed out for our drive home.

We enjoyed our time there a lot and if there weren’t so many places to go in such a short amount of time, we’d probably go back. I’d recommend it for someone who likes a bit of isolation. The resort isn’t stroller friendly and if you’re in Escolta instead of a house you could be climbing three long flights of stairs to get to your room.

It’s a fun adventure and a unique place to stay.

I’ve been busy with a visit from my in-laws. We’re having a good time. We went on a two night trip to Las Casas Filipinas de Acuzar which we all enjoyed. Today we brought them to S&R (like Costco) to show them what it’s like on our side of the world (very similar, actually). We’ve been in our pool almost every day. We’ve also been malling (going to a mall).

Everyone in the family is pretty much over the ickiness that was in the house. Coen’s turned into a double ear infection. After a day of antibiotic, mucolytic, and pain reliever he became much more happy. I seem to be going down hill again, but I guess these allergies are a rollercoaster ride for me.

The grandparents are babysitting tonight, giving John and I a chance to go on a date night. We love date nights, and are very thankful they’re doing this for us.