I decided not to get checked out for bronchitis. I did some research on it and bronchitis can't be treated. So why waste money going to the Dr for him to tell me that he can't do anything for me. I did read though that if you have it for six months you should go see if there are any serious health problems related to it.

I am still sick! My brother-in-law and his wife decided to come down for Thanksgiving weekend. They arrived at 5:00pm on Thursday and left at 5:30 on Saturday. It was a short trip but we had a really good time. My cold was the worst it has been since I got it over three weeks ago. It improved on Saturday and again yesterday but I'm still coughing. Another week of this and I might get checked for bronchitis.

I really don't feel like doing the whole picture thing, but I will upload pics and maybe vids from Malachi's party.
Posted by Sara at 12:11 PM 2 comments:

Some of you have been asking for an update. I have been sick for over a week and my son got the cold not long after I did. Combine that with being pretty busy and not really recovering I haven't really felt like updating my blog. I'm still a little sick and I'm still pretty busy, but I feel like an update is now way overdue.


John and I celebrated our sixth anniversary on Saturday. I seriously can not believe that it's been six years. On the other hand - it feels a lot longer than that.

We decided that this year instead of one person planning the whole day of celebrating that we'd split it up. John would plan the first part of the day and I would plan the second. I had a really good time planning my part of our day. I knew that Mickey (my mother-in-law) was coming to babysit and she was going to spend the night so we had no restrictions on what to do.

So I got up that morning at seven and got ready for the day. Malachi woke up when I was doing said task and it was perfect timing because he and I needed to leave at 7:45 to go to the airport to get Grandma. He was very excited about that. After I got Mickey from the airport we went to the grocery store so she and Malachi could make cookies and so they could have meals while we were out.

When I got home John took me to breakfast at our favorite breakfast spot - Mama's Daughter's Diner. We had a big breakfast because we knew that the next meal would be dinner. While we're at breakfast I see a cop at our next table and as she walks by us to leave I shiver at her gun and say I don't like guns - because I'm scared of them. On the way home John says that he want to tell me what we're doing because of something I said at breakfast that would indicate I might want to back out. I told him I didn't want to back out and that I can't think of anything that he would plan that I wouldn't want to do. So he didn't tell me what we were going to do and I was more excited about the surprise activity.

After breakfast we went back home and John went to the store. He got back and said it was time for us to go. So when we're in the car on the way to his event he said he had something for me in his pocket. I reached in and found a bullet. I got really excited that we were going shooting because I've wanted to go shooting for a long time. When he went to the "store" after breakfast he really went to a friends apartment where he borrowed a gun.

We got there and had to wait for a little bit but we bought our targets and ammo and paid our range fees. Then when a couple of security guys left we got to go in. John taught me how to shoot and showed me a couple of shots. I had no stinking idea how loud it was going to be. John tried warning me but I still jumped a foot off the ground the first few shots. Even after I started shooting it was surprising me.

But to my surprise I wasn't that bad. It took almost 30 rounds for me to be able to have at least an eye open. for some reason, after I aimed I would shut both eyes then squeeze the trigger. It was a little scary for me and I was shaking after the first couple rounds, but it got easier as I went. I shot about 40 rounds and had a really good time. I was on a huge adrenaline rush after I left and we stopped to get DQ to help calm us down. It worked, by the time we got home I was completely off my rush and I was super tired because it turns out that shooting is a bit exhausting.

We decided to go see a movie because we needed to pass time between shooting and my activities. We went and saw No Country for Old Men. It was a good movie. I would see it again sometime.

After that we stopped at home to pick up the picnic lunch that Mickey made. And we drove over to our old apartment. Before we got out of the car I told John that one of the best dates we've ever been on was my senior prom when his mom made a picnic for us and he took us to all the places that were special to our relationship (where we met, where we first flirted, where we had our first date and kiss, etc.) and I wanted to duplicate that date with places that meant something to us here in Texas. I wanted to go where we stayed when we came down to TX the very first time on vacation. We made some friends that I hope we'll have for life but unfortunately I didn't contact them in time and we didn't make it up there. So instead we started out at our first apartment. Fortunately for me we know the people that live there now and I gave them a call to see if it would be ok to visit the inside of the apartment instead of having to stare at the bedroom window from our car. So we went in and saw our first TX apartment.

She was sitting in the living room eating dinner and that was a little weird, but otherwise it was pretty fun to picture it the way we had it and to go over some memories. We moved from there to our picnic in the family picnic area outside the apartment.

After our picnic we "walked to school" like we did so many mornings the two years we were students. We laid on the steps at the main building and talked about our many school memories, the good teachers and the good, famous, and not so good special speakers.

We "walked home" and got in the car and drove to our apartment in Grand Prairie which is where we had almost my whole pregnancy, started playing WoW and had our first and only auto break-in. It was also our first home with Malachi. We have some pretty great memories there.

After that we went to the hospital. There are some pretty emotional and physical painful memories there, but it was definitely an important place in our marriage. John pointed out the room I stayed in and the room I delivered in. I was glad that he did that because I didn't remember :) We then walked by the doors of the NICU (can't go in when we don't know a baby - which is fine by me!). I'm so glad that that chapter of our lives is over and Malachi is a perfect little two year old!

We had one more stop. The first four John figured out so I was really happy when he couldn't figure this one out (I had one surprise for him at least). We headed to Starbucks - that's right...Starbucks. Last year after John finished his second year at DBU John and I had a fear that we weren't moving in the direction that God had for us and we wanted to consult with our Pastor and have him pray for us. That meeting really helped us to set the course we're on now. It also was where John pulled of his best prank. You'll have to ask him about that one.

We got home in time to see our son before he went to bed - which made John really happy. It was one of the best anniversaries we've had in the last six years and we both had a really great time. I have no idea how we're going to top it next year :)

So...this ended up being really long, I'll make other updates short:
We've been sick - John's better, I'm almost better, Malachi's still working on it.
Malachi's 2nd birthday is on the 23rd - next Friday, his party is on this Saturday, it's going to be awesome! Please pray that everyone's done being sick by then! 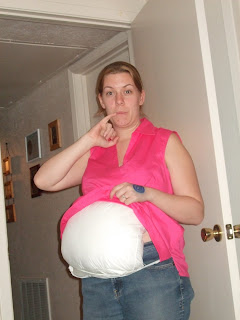 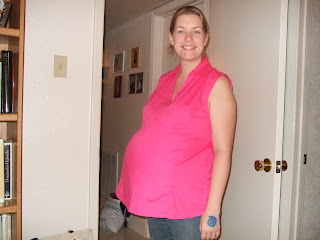 The people at church who know me were very confused, surprised, and dumb founded when they saw my costume last night. I had so much fun doing it. I almost didn't find a shirt, but my girlfriend found one that fit the pillow. I look really big too!

Malachi went as a Cowboy but he just had on overalls and a plaid shirt. His overalls say Little Cowboy on them. He wouldn't wear his hat for very long so daddy ended up wearing it most of the night. The weather cooperated with us - I never had to put on long sleeves. People in our church really get into the harvest festival - I had a really great time.

BTW in case you ask, no I didn't get pictures of Malachi. Maybe when his outfit is washed I'll get one taken and put online for y'all but he didn't really dress up special.
Posted by Sara at 7:00 PM 3 comments: